Girl Gamers: What's in a name?

I have never referred to myself as a "girl gamer". But, I suppose I fit the definition. I am, indeed a woman, and I spend more hours than I care the admit playing video games. I started playing video games at the wee age of five. My mother swore it was just a phase as she sold my Super Nintendo at a garage sale; I cried. I've never fully recovered from the separation. And, much to my mother's dismay, 16 years later, I still haven't grown out of that video game phase.

I spent 80 hours of my Spring Break of '04 playing Final Fantasy VIII, only taking breaks to sleep, use the rest room, and zap the occasional quesadilla in the microwave. I have caused a boy from Hong Kong to skip an entire day of college classes just so he could practice his moves in Soulcalibur to ensure I wouldn't beat him anymore. I have regrettably thrown my controller at my TV screen after getting my rear kicked too many times in a row by a boss. I can get as many head shots as my boyfriend in Resident Evil, and I use less continues in the Metal Slug series than my boyfriend.

But, I'm torn as to whether I should embrace the title "girl gamer" or if I should reject it with every ounce of my existence.

Why is there a need to specify one's sex in the world of video games? Does it suggest gals who play video games are somehow not as good or not as competitive? This is so far from the truth; many girls who dedicate their time to gaming are just as good as their male competitors. And many of these girls would probably prefer to be considered as an equal instead of a rarity as it so often seems to be the case. Why is it hard so believe girls like to kick back and defend their borders from zombies, radiated mutants, and skags?

That being said, part of me wonders if, for the time being, the title is important. Gamer culture is still geared toward a male audience despite the growing population of female gamers. Women (over the age of 18) make up 40% of the gaming population (via ESA). However, female video games characters, if present in a game at all, tend to reflect an image terribly difficult to obtain, not unlike the images our TVs, movies, and magazines portray. My breasts will never be that large, and my waist will never be that small. Nor will I ever wear such little armor if ever forced to fight aliens, ninjas, and other vicious fiends. 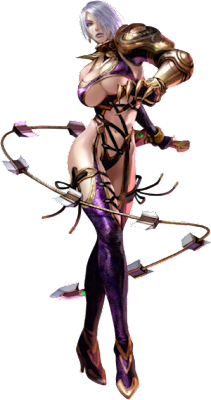 Ivy Valentine from Soulcalibur
Really, how will this protect you during a fight to the death?
And, many of the games designed for girl gamers are disappointing to say the least: There more gender neutral games available-- like the Final Fantasy series or the Kingdom Hearts series. But, rarely do these games have have female lead heroes. Lulu and Rikku of Final Fantasy X may kick more fiend behind than lead-hero Tidus, but Lulu and Rikku are still just sidekicks. And, Rinoa and Kairi need to be protected and saved by their less-than-charming prince.

I wonder if embracing the title of "girl gamer" will eventually, in some way influence game design. In some ways it has-- Zoey and Rachelle from the Left 4 Dead series as well as Faith, from Mirror's Edge are a bit more realistic looking. Their outfits are understated, and they provide characters with sufficient protection (from natural elements that is, like the rain or cold. No matter how thick a track jacket may be or how rad a Depeche Mode shirt may be, these articles of clothing to not protect an individual from a horde of zombies). 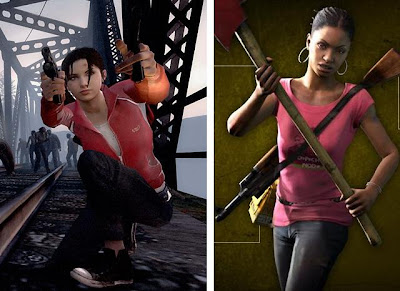 Left: Zoey, L4D; Rochelle, L4D 2
Maybe if we embrace the title of "girl gamer" there will be more female oriented games that don't revolve around traditional gender roles, like babysitting, planning weddings, or learning to cook (all of which you can play on a pink Nintendo DS, btw). Instead, I hope for games that have strong female lead roles-- ones who don't need the help of a male companion. I hope for games that present an even more realistic image of women, not just some hyper-sexual object of ogling. And, I hope people, regardless of gender, will appreciate these games.

What do you think? Girl gamer or no?
Posted by Pretty Little Things at 8:00 PM