How can we possibly have a music feature without honoring some of the greatest, most-groundbreaking feminist rock stars of all time?

The Riot Grrrl movement is synonymous with the Third Wave movement of the 1990's. It symbolizes a time when adolescent girls and young women were taking charge of their music - by making it.

Hardcore punk-rock had been mostly a male phenomenon. Girls were excluded from hardcore the same way they were excluded in society from many other male-only rituals, whether street gangs or USA football. The "riot grrrrls" movement of the 1990s changed the sociopolitical landscape of punk-rock by introducing the "girl factor" into the equation of frustration/ depression/ desperation/ anger. - A History of Rock and Dance Music 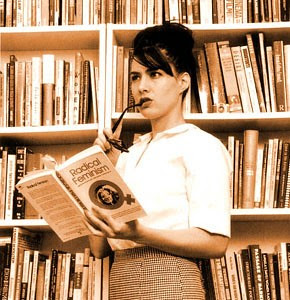 The artist most frequently associated with the movement is resident badass Kathleen Hanna, who apparently inspired the title for Nirvana's Smells Like Teen Spirit. Her band Bikini Kill is iconic of Riot Grrrl.

Soon they decided to form a band of the same name and enlisted guitarist Billy Boredom. The rest, as they say, is herstory.

The band is most well known for its single, "Rebel Girl":

Riot Grrrl is important for many reasons. Women and girls took their place in punk music for the first time. But more significantly, the music was empowering and addressed important social issues such as domestic violence and LGBTQ rights.

Check out the Riot Grrrl manifesto and Girls to the Front: The True Story of the Riot Grrrl Revolution, to be published in October, and, of course, a list of Riot Grrrl bands.
Posted by Pretty Little Things at 12:00 AM