I intended to post this early on Sunday. So what if I'm a tad bit late. The day after Mother's Day is still a good day to celebrate my mom (and yours)! Here is a top ten list:

10. She used to be able to understand Morse Code 30 words per minute.

9. During summer, she participates in several 5k walks for charity.

7. She always knows what's going on in the world. Every little nook and cranny of the world.

6. She pushed me to try things I never would have considered doing. Ever. As a result I have a bunch of first and second place bowling trophies from when I was on a bowling league in 7th grade.

5. She still loves my dad and I even though we do stuff like this: 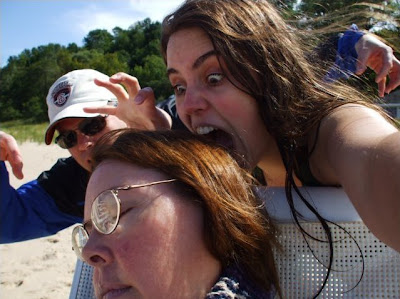 What? We thought it was funny...

4. She could probably beat you at Scrabble. She can rack up zounds of points with the word "Jo".

3. She went back to school to study accounting while holding a full-time job and helping my dad raise me. Oh, did I mention she was the "bread-winner" of the family at this time?

2. She beat cancer! Liposarcoma-- a malignant tumor that develops in fat cells. She had a tumor the size of a grapefruit in her thigh. She had it removed without going through radiation. A year later she's still cancer free!

Your turn. Why is your mother awesome?
-Jackie
Posted by Pretty Little Things at 1:35 AM